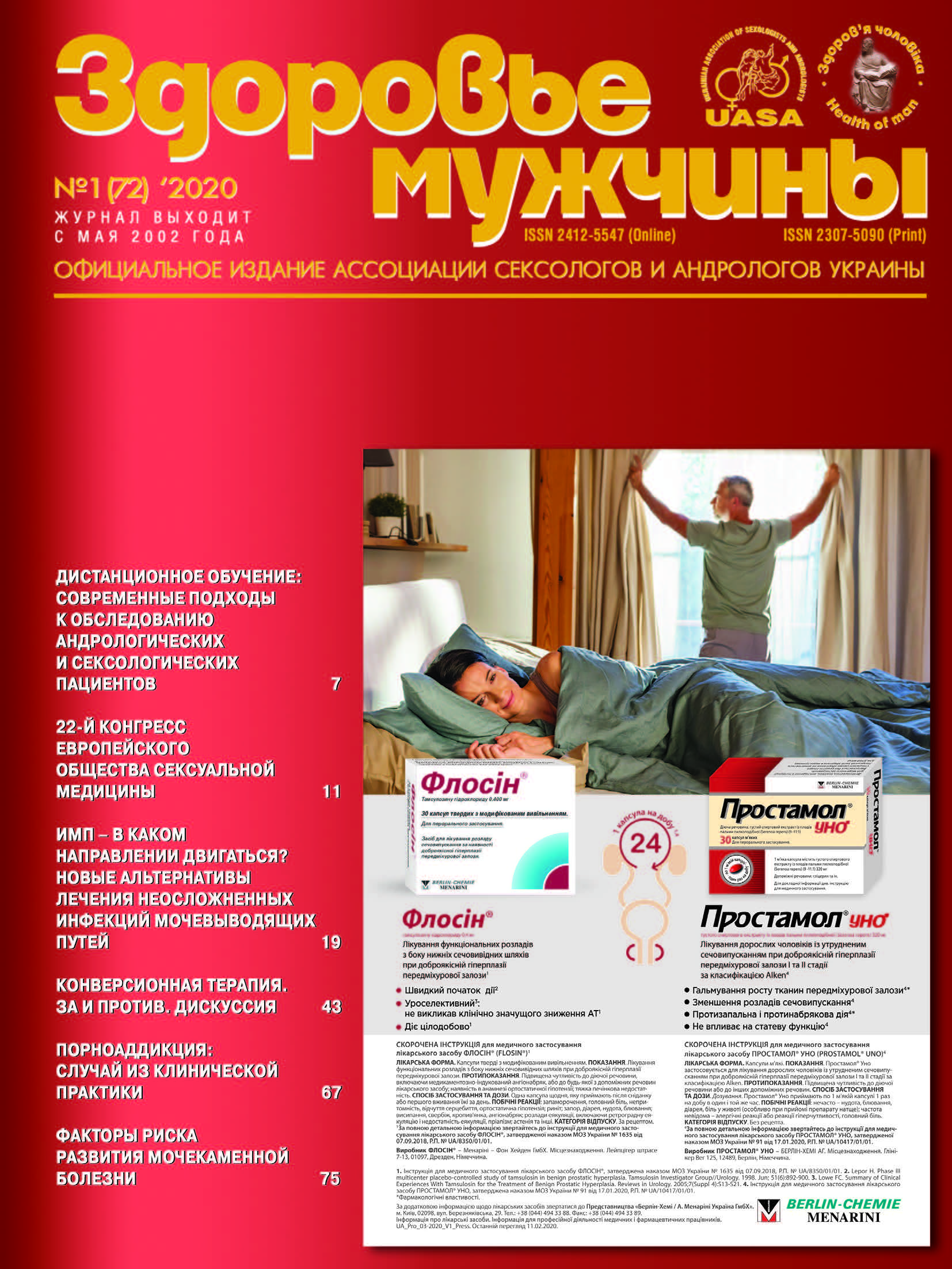 Despite the progress in the study of urolithiasis, the problem of the occurrence of this pathology remains one of the most complex and not yet fully resolved. In terms of prevalence, this pathology inUkrainetakes the second place among all urological diseases. Among the adult population of the planet, urolithiasis is observed in more than 4 %. InUkraine, approximately 7 % of the adult population suffer from urolithiasis. The growth rate of the incidence is 0,16–0,22, and the incidence rate is 30–40 % of the entire urological pathology, which indicates an unfavorable prognosis regarding the further spread of this disease. Joining an infection, which exacerbates the disease and worsens the prognosis, is observed in almost 70 %. Early diagnosis, timely diagnosis and determination of treatment for urolithiasis play a large role in the final result of the disease.

The objective: was to determine the effectiveness of the use of inflammation predictors in patients with urolithiasis and to model further treatment tactics.

Results. When analyzing the results of peripheral blood in two groups, no significant differences were found (P>0,05). That is why, the analysis of these indicators was carried out with an additional enzyme-linked immunosorbent assay of urine with mandatory consideration of the clinical picture of the disease. According to the results of the study, the indicators of markers of early damage to the kidneys were more informative than general laboratory ones and indicated the presence of signs of an infectious and inflammatory process in the first 12–24 hours.

Conclusion. As a result of a clinical study, it was proved that the use of predictors of inflammation, as a diagnostic criterion for an infectious and inflammatory process, is a valuable clinical tool for urolithiasis, which in more than 50 % of cases, even before the appearance of general clinical and laboratory changes, indicates the development of the inflammatory process and impaired renal function in the first 12–24 hours. Thanks to the study, it was possible to develop an algorithm for examining and choosing a method for treating patients with urolithiasis.

This work is licensed under a Creative Commons Attribution-NonCommercial-NoDerivatives 4.0 International License.

The journal does not require authors of original (primary) research papers to assign the copyright of their published contributions. Authors grant the journal an non-exclusive licence  CC BY 4.0 (Creative Commons Attribution 4.0 International License) to using and the first publication of the original in this journal. Copyright of the manuscripts is retained by the authors, after publication authors retain rights to reuse their papers in their future printed work without first requiring permission from the publisher of the journal and share their own published articles.

The journal supports the self-archiving process. Prior to publication in the journal, authors may post a copy of their manuscript in preparation or submitted to the journal in recognized non-commercial preprint servers, public websites.  Authors also are encouraged to archive their final author version of the manuscript in their institution's repositories and, if they wish, on their personal websites. Authors should cite the publication reference and DOI number on the first page of any deposited version, and provide a link from it to the URL of the published article on the journal's website.

To facilitate self-archiving of original research papers and help authors fulfil funder and institutional mandates, the journal deposits manuscripts in National Library of Ukraine by V.I. Vernadsky, Scientific periodicals of Ukraine database and different international scintificd database on behalf of authors who opt-in to this free service during submission. The journal provides depositing of articles on official website of the publisher. The full text access to published papers is free.

Head of Department of Urology